In recent years, future climate change has increasingly been recognized as one of the most important issues of the twenty-first century, challenging the very structure of our global society. No longer just an abstruse scientific concern, it prompts difficult choices for both individuals and governments. Moreover, it is of the first importance to those working in disciplines such as climatology, engineering, economics, sociology, geopolitics, local politics, law, and global health.

Emanating from across the social and natural sciences, as well as in the humanities, serious scholarship on future climate change flourishes now as it has never done before, and this new title in the Routledge series, Critical Concepts in the Environment, meets the need for an authoritative reference work to make sense of a vast literatureâ€”and the continuing explosion in research output. Edited by leading scholars in the field, this new Routledge Major Work is a four-volume collection of foundational and cutting-edge contributions.

The first volume (‘Science’) in the collection deals with the development of the science of global warming and climate change, starting with Tyndall (1861), through to the IPCC synthesis (2007), and ending with the very latest research. Volume II (â€˜Impact Assessmentsâ€™), meanwhile, assembles the best thinking on how the potential physical, biological, social-political, and economic impacts of climate change are assessed. This volume also includes material on potential surprises that science is starting to investigate, such as the rapid melting of the Greenland and Western Antarctic ice sheets, die back of the Amazon rainforest, release of gas hydrates, and other tipping points. The third volume (â€˜Politics and Solutionsâ€™) gathers the most influential research on climate-change solutions; it encompasses global and local politics, engineering, renewable energy, and geoengineering. The final volume in the collection (â€˜Framing the Debateâ€™) brings together key scholarship to question and explore how the climate-change debate has been framed and reframed as a scientific, economic, security, health, development, geopolitical, ethical, and cultural issue.

With comprehensive introductions to each volume, newly written by the editors, which place the collected material in its historical and intellectual context, Future Climate Change is an essential collection destined to be welcomed as a vital research resource by all scholars and students of the subject.

Greg J. Smith writes an interesting article contributing to a distributed discussion looking at naturally occurring processes and formsâ€”specifically, glaciers, islands, and stormsâ€”and to ask how these might be subject to architectural re-design.

During The Placeâ€™s biennial Choreodrome research and development project for choreographers there will be three presentations given in the Robin Howard Dance Theatre on different aspects of creativity. The series involves theatre, performance and live artists working on the far edge of choreographic practice, and are designed to inspire new conversations about choreography, movement and performance. The seminars are open and free to all who wish to attend.

Martin John Callanan is an interdisciplinary artist whose work spans numerous mediums and engages both emerging and commonplace technology (http://greyisgood.eu). His work has included translating active communication data into music; freezing in time the earthâ€™s water system; tampering with banknotes; writing thousands of letters; capturing newspapers from around the world as they are published; taming wind onto the internet and broadcasting his precise physical location live for over two years.

Martin’s work is always decidedly deadpan and served with a dash of ennui. Some of his more well-known pieces include the ambient audio installation Sonification of You, the meta-news aggregator I Wanted to See All the News From Today and Text Trends, which abstracts the casual manner in which we receive, scan and process information and language on a daily basis.

Martin is currently Artist in Residence at UCL Environment Institute and Teaching Fellow at the Slade School of Fine Art UCL.

He will discuss the power of narrative and the role of performance and metaphor within his work. You will be asked to question whether the artist or audience is the real performer: where and when the performance really takes place. 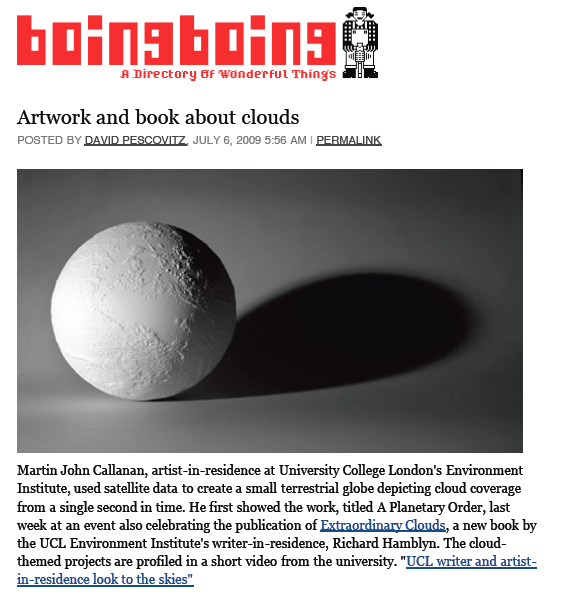 Martin John Callanan, artist-in-residence at University College London’s Environment Institute, used satellite data to create aÂ small300mm terrestrial globe depicting cloud coverage from a single second in time. He first showed the work, titled A Planetary Order, last week at an event also celebrating the publication of Extraordinary Clouds, a new book by the UCL Environment Institute’s writer-in-residence, Richard Hamblyn. The cloud-themed projects are profiled in a short video from the university. “UCL writer and artist-in-residence look to the skies”

A writer and artist-in-residence at UCLâ€™s Environment Institute are holding a joint launch for a new book and work of art â€“ linked by the theme of clouds.

Artist-in-residence Martin John Callanan has createdÂ A Planetary Order, a terrestrial globe showing clouds around the planet from one single moment in time.

Hamblyn has already written several books on the subject, includingÂ The Invention of Clouds, which won the LA Times Book Prize, and a pictoral guide to cloud formations calledÂ The Cloud Book.

Extraordinary CloudsÂ grew out of his research for the latter as he amassed a collection of images that did not fit into any standard category, such as the uniform streaks of â€˜street cloudsâ€™ and the bulbous â€˜lenticularisâ€™ sometimes mistaken for UFOs.

He said: â€œI had been commissioned to research and writeÂ The Cloud BookÂ (which came out in 2008), using the Met Officeâ€™s amazing photo archive, and I kept coming across weird and wonderful clouds that seemed to defy categorisation, but becauseThe Cloud BookÂ was intended to be a fairly serious pictorial guide to all the clouds listed in the international cloud classification, most of these oddities were left out.

â€œBut I carried on collecting more and more of them, finding them in photo libraries, trawling the internet, asking photographer friends and acquaintances, and within a year I had amassed several hundred pictures of bizarre and beautiful cloud formations.Extraordinary CloudsÂ is the result.â€

Some of the most spectacular images in Hamblynâ€™s book came from The Cloud Appreciation Society, a 17,000-strong group of cloudspotters.

Callananâ€™sÂ A Planetary OrderÂ examines the fragility and interdependence of the Earthâ€™s environmental systems.

The artist, a teaching fellow at UCL Slade School of Fine Art, said: â€œUnlike Richard, whoâ€™s got a fascination with clouds, Iâ€™ve never really considered them before. Iâ€™ve been more interested in systems â€“ systems that define how we live our lives. The idea behind the cloud globe is to show and highlight the fragility of the environmental systems that operate in the world.â€

Callanan then turned the raw data into a 3D computer model with the help of the UCL Slade Centre for Electronic Media in Fine Art.

It was printed at the Digital Manufacturing Centre at the UCL Bartlett Faculty of the Built Environment.

â€œThe Digital Manufacturing Centre creates architectural models for students, researchers and commercial clients, but this is the largest object they have ever created and it took two days just to manufacture,â€ said Callanan.

The launch party forÂ Extraordinary CloudsÂ andÂ A Planetary OrderÂ will take place on 30 June in the universityâ€™s main quadrangle at Gower Street.

Extraordinary CloudsÂ is available from all good bookshops andÂ A Planetary OrderÂ will go on display at UCLâ€™s Pearson Building later this summer.

UCL context
The Environment Institute acts as a focus for interdisciplinary research on the environment at UCL. It exists to improve links between the UCL research community, policymakers and private sector interests. It aims to identify the environmental concerns that will drive future policy agendas, and to contribute the science required to address them.