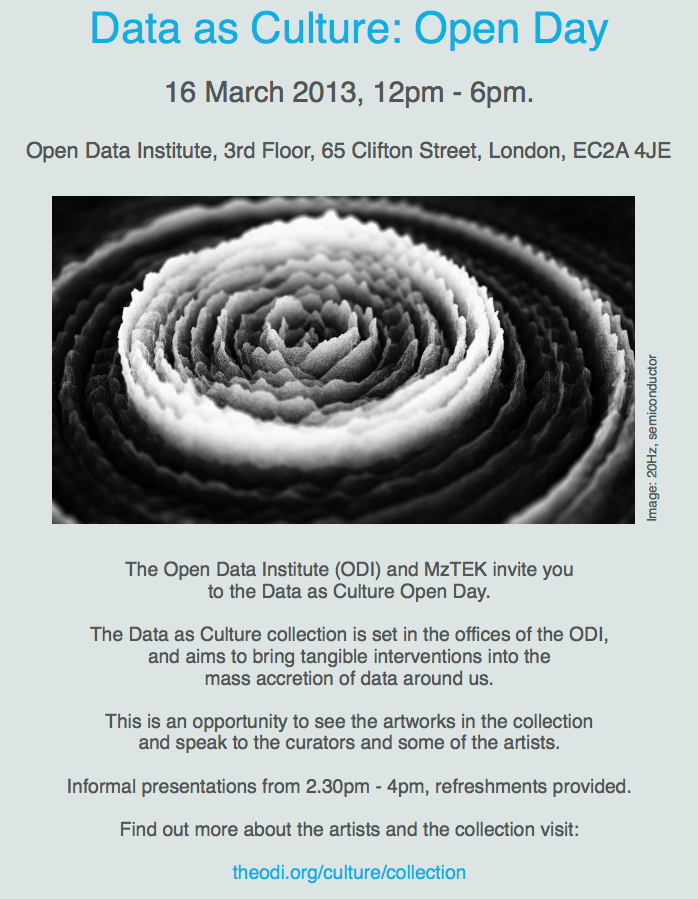 Your chance to get hold of issue #3 of Text Trends newspaper.

The Open Data Institute (ODI) and MzTEK invite you to the Data as Culture Open Day.

The Data as Culture collection is set in the offices of the ODI, and aims to bring tangible interventions into the
mass accretion of data around us. This is an opportunity to see the artworks in the collection and speak to the curators and some of the artists.

Find out more about the artists and the collection visit: theodi.org/culture/collection

SIGGRAPH 2012 Art Gallery: In Search of the MiraculousÂ presents exceptional digital and technologically mediated artworks that explore the existence of wonderment, mystery, and awe in todayâ€™s world of mediating technologies and abundant data. Of the nearly 400 submissions, 12 were hand-picked by a jury to be exhibited at SIGGRAPH 2012, 5-9 August at the Los Angeles Convention Center. The jury included a wide range of artists, designers, technologists, and critics hailing from academia, industry, and the independent art world.

In what at first may look to be a common Earth globe, Callananâ€™s A Planetary Order makes a poetic statement by shifting our attention from the usual geographic information by voiding the usual terrestrial markings, and instead presents an immortalized ephemeral instant, eternalizing a fleeting moment shared by the global whole, giving us pause to reconsider what really matters in this world.

This exhibition presents new media through world news. New innovative ways of communication are infiltrating the lives of people all over the world. We no longer have to wait for the morning paper to hear about current news and world issues now that new digital media brings light to new ways of disbursing information in seconds. These particular artworks retrieve current news by pioneering the use of digital computation and visualization. The Oracle of Elsewhere by Ian Wojtowicz presents us with a 3D generator that exhibits a rotating model of earth. This visualized globe not only conveys current live news around the world, but does so in a way that is extremely innovative with todayâ€™s technology by allowing the viewer to geographically choose the current news as it fluctuates through Googleâ€™s database. Similar to this oracle the rest of the artworks demonstrate world news as it happens. The artwork created by Martin John Callanan provides a web page that displays single images of hundreds of newspapers from all over the world. As we continue evolving into this new day of age that is the world of technology Callanan and Wojtowicz, as well as others, are able to make latest news available to millions with creative ways of streaming communication.

The exhibition brings together works that record precise moments in time. Shown alongside the artworks are historical artifacts that could be seen as the raw data that the artists collectively share an interest in. Meticulously collating, analysing and visualising data are recurring themes and the singular objects, video and sound works are the result of the combined energy of a wealth of individual units of information.

The selected works deal with human endeavour and a desire to chart a world that often defines a comprehensible scale. Whilst firmly rooted within an analytical framework, tender moments and a delicate splendor inevitably surface from the rigor of systems and theory.

A text by Diane Sims will accompany the exhibition.
The exhibition is curated by Lizzie Hughes

The 11th edition of FILE â€“ Electronic Language International Festival â€“ takes place this year at centro cultural fiesp â€“ ruth cardoso, Brasil, from july 27th to august 29th, 2010. The programme occupies the art gallery of sesi-sp, the fiesp space, the theater and the mezzanine of the cultural center that hosts the exhibition with interactive installations, games, machinimas, internet artworks, performances and workshops.

Media Art shows how to “soften” the rigidity of technology functionality and to create an environment of creativity and artistic thinking. FutureEverything, taking place 12-15 May in Manchester UK. Expect world premieres of astonishing artworks, an explosive citywide music programme, visionary thinkers from around the world, and awards for outstanding innovations. 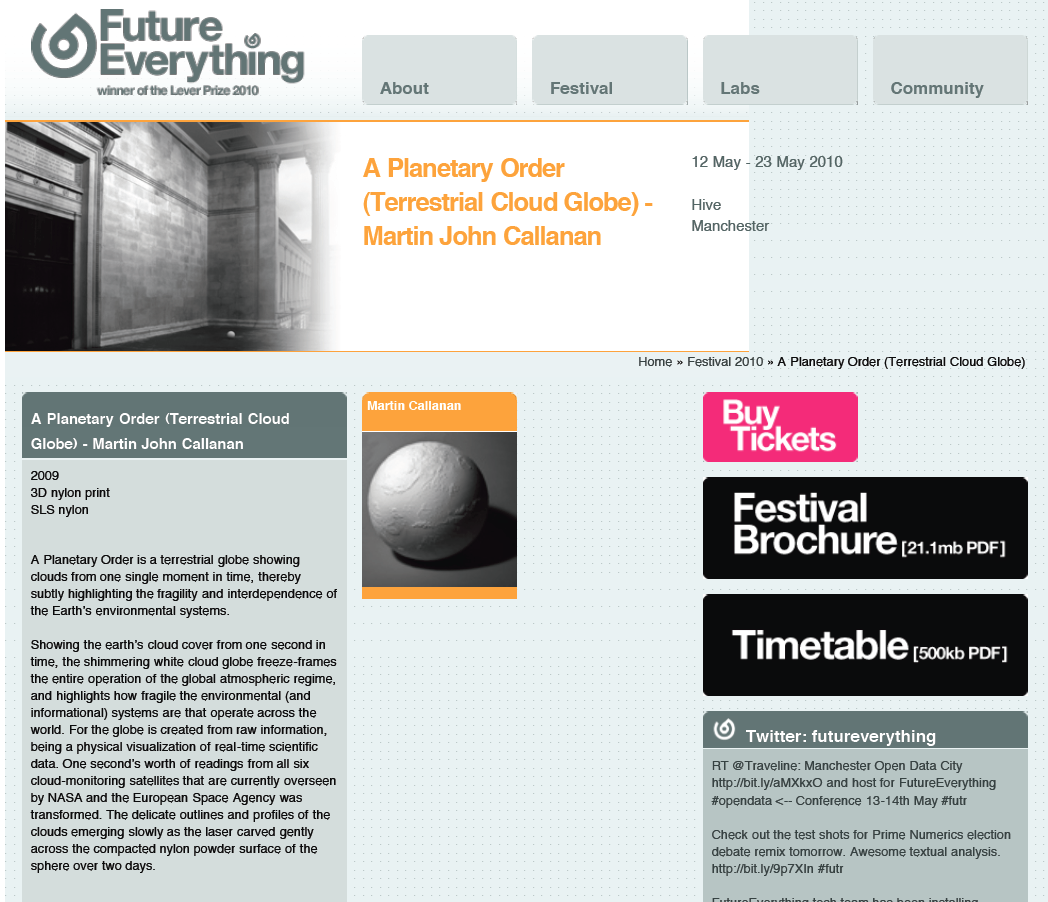 WHAT IS THE MAIN IDEA OF THE PROJECT AND WHO IS THE TARGET GROUP?

Established through the process of differentiation toward the other, it has been reshaped in relation to changes in the environment, i.e. social, political, cultural or economic changes etc. The process of differentiation and identity transformations in the individual or collective sphere, on national or European levels, were depicted as artworks that formed the programme “At Home in Europe”.

WHAT DOES THE PROJECT INCLUDE?

Designed to meet the current need for mobility, to enable cross border connectivity and empower professional and cultural exchange, the “At Home in Europe” programme was developed using four main activities:

The activities were followed or preceded by four working meetings of the coorganisers, each of which took place in one of four participating countries.

Dislocated from their countries of origin/residence, they were in the position to quickly grasp the new environment and to give feedback to a framework question: “What is culturally European and what is culturally national when viewed from within Europe but outside a national experience.” Digital artworks, done in the form of video/sound/internet/or interactive art, are also available through blogs as a document of the work-in-progress.

To stimulate exchange of ideas and interaction with local communities, each artist had an opportunity to present her/his work, and to do a workshop for young people.

Co-curated screening programme in the Big M, focused on moving image culture. This project consisted of 16 short video works selected by the coorganisers on the basis of the international call. The video works thematised the notion of “European Identity” by posing the question “Can we ever really be At Home in Europe?”. They tracked the phenomenon of moving through different identities in the melting pot of contemporary Europe. The digests of the films are encompassed in pdf “Leaflet_at_home_in Europe” (see attached document).

The Big M European screening tour was shown at festivals and public sites in Sofia, Stockholm, Bergen, Riga, Newcastle Upon Tyne, and Berwick upon Tweed during May-September 2007. Designed as inflatable structures equipped for presentation of video and digital media, The Big M provided a sight that blended different artistic surveys in the one cross cultural narrative. This attractive mobile venue brought an air of moving image festivity to the city squares across Europe tempting an audience to come inside, experience its content, and reflect on “What it means to be European?”.

“In Sofia we had on average each day around 1,000 people visiting the venue and a great deal of local press, television and radio coverage.”Â (Sharon Bailey, Co Director ISIS Arts)

The publication and DVD summarise the results of the project. The book (written in the four languages of the partners) includes essays on the project process, on the artists’ works, and on the issue of European identity. DVD includes media-based artworks that were part of the “At Home in Europe” programme.

WHAT IS THE REASON FOR THE COLLABORATION WITH EACH PARTNER?

Four partner organisations cooperated in this one-year project, all of them with the same professional orientation (working in the field of media arts), but from countries with different socio-political and cultural backgrounds (e.g. UK – established EU member; Latvia – recent EU member; Bulgaria – entered EU in January 2007; and Norway – decided against EU membership). This diversity provided a start up for transnational settings, but assured the variety of cross cultural approaches to the theme. International calls for artists were widely distributed.

HOW IS THE PROJECT FINANCED?

Location of I included in a Rhizome Exhibit curated by Corey Richardson:

This exhibition features four artworks that focus on aspects of surveillance and tracking of the private and public lives of humans in the world of today and the projects were brought together to hopefully expand our consciousness concerning the increasing lack of privacy in our lives today. With the remarkable advances that technology has gone through in the past several years, the lives of people in the world today are more public and available than ever before in history. In this world of Wireless internet, cell phones, digital cameras, credit cards, and surveillance cameras, we are being observed and tracked mare than ever before. It is hard to imagine how often someone is “tracked” everyday of their life and most people don’t think about it, but just like the three artists shown in this exhibition, I hope to open some eyes and get people thinking about the privacy issues of today. So, imagine if you wanted to disappear, hide, or vanish in today’s society. You would need to eliminate ways for anyone to track or watch you, but that is completely impossible it the world of today. That would mean no credit card use, the emails, no cell phone calls, and no internet, but even then, your information and records would still available online and there would still be cameras in every store, school, and on every corner. Staying private is impossible with just simple tasks in today’s life and that’s without even getting the FBI or CIA involved. Technology has made it impossible to “hide” from the world. Just think, Google earth is available to anyone in the world and it is just the tip of the capabilities when it comes to satellite and cameras so imagine what is considered “private” to the general public but is available to governments for surveillance. There are devices being used that the general public wonâ€™t know about for another ten years and advances in technology being made everyday. We all might as well live in glass houses, because there really is no private life available anymore.

Martin John Callanan’s artwork shows that it is impossible for the artist to “hide”. His location is constantly being recorded and made available on his site. This piece helps to show the point that we can easily be tracked in today’s world.