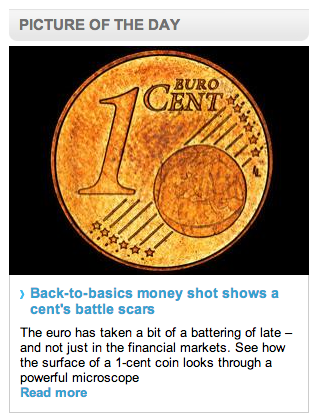 The euro has taken a bit of a battering of late – and not just in the financial markets. As you can see for yourself above, the surface of a 1-cent coin, while smooth to the naked eye, is pitted and scarred when viewed through a powerful microscope.

To create this image, artist Martin John Callanan, a fellow at University College London based in the Slade Centre for Electronic Media in Fine Art, worked with Ken Mingard, Petra Mildeova and Eric Bennett at the UK’s National Physical Laboratory in London. The team used an optical microscope to create images of the lowest-denomination coins used in Australia, Burma, Swaziland and Chile, as well as the transnational euro. They took standard coins that had been in circulation and left the microscope to make 4000 tiny exposures overnight. It then took three days of processing to stitch these images together to create each final, 400-million-pixel version. The zoomable picture above is a low-resolution version.

The coin images are part of an ongoing series called The Fundamental Units in which Callanan explores “the atoms that shape the global economy”. Ultimately, the series will encompass all 166 of the world’s active currencies that use coins. The first five are on display as 1.2-by-1.2-metre prints, along with more of Callanan’s works, at the Galleria Horrach MoyÃ  in Mallorca, Spain, until 17 January 2013.

Physics & Math, Picture of the Day, Science In Society