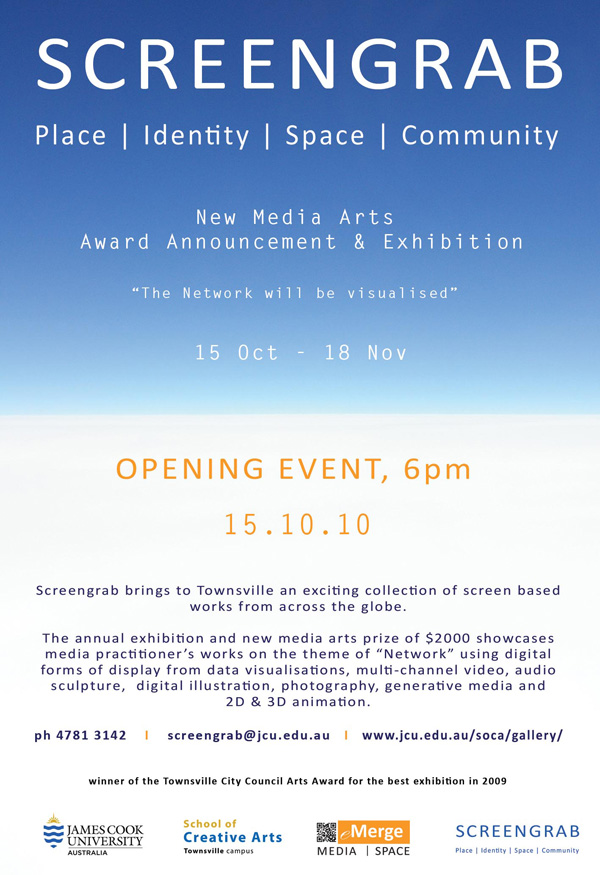 On Friday night (15.10.10) at James Cook Universityâ€™s eMerge Media Space the 2010 winner of the Screengrab New Media Arts Award was announced ~ Italian artists, Juliana Gotilla and Izabel Rainer Harbach.The $2000 prize which is sponsored by the School of Creative Arts represents the Media Spaceâ€™s premier exhibition for the calendar year and attracts a global roster of artists working within the fields of screen based media and electronic arts.

The Italian duoâ€™s video art piece, Fluid Network, captured the judgeâ€™s attention with its intriguing execution and quirky interpretation of this yearâ€™s theme â€“ the Network.A strangely nostalgic construction, Fluid Network torments the viewer with the familiar sounds of network communication software â€“ Skype, Instant Messenger apps, modems and ICQ chat alerts â€“ as pools of liquid with an uncanny similarity to a map of the earth is slowly flooded by drops of water.It has to be seen â€“ and heard – to be believed.

AsÂ Mitch Goodwin, Creative Arts lecturer and one of Screengrabâ€™s curators notes, â€œThe cultural diversity of the works on show is indicative of the Screengrab exhibitionâ€™s primary goal, which is to critique screen culture via the very medium which makes the exhibition possible.Publicity for the award, the selection of the media works and the acquisition of the shortlisted entries is all conducted exclusively from screen to screen via digital media networks around the world.â€

The Screengrab exhibition will be on show at the School of Creative Artâ€™sÂ eMerge Media SpaceÂ at James Cook University until Friday 19th November.Entry is free.