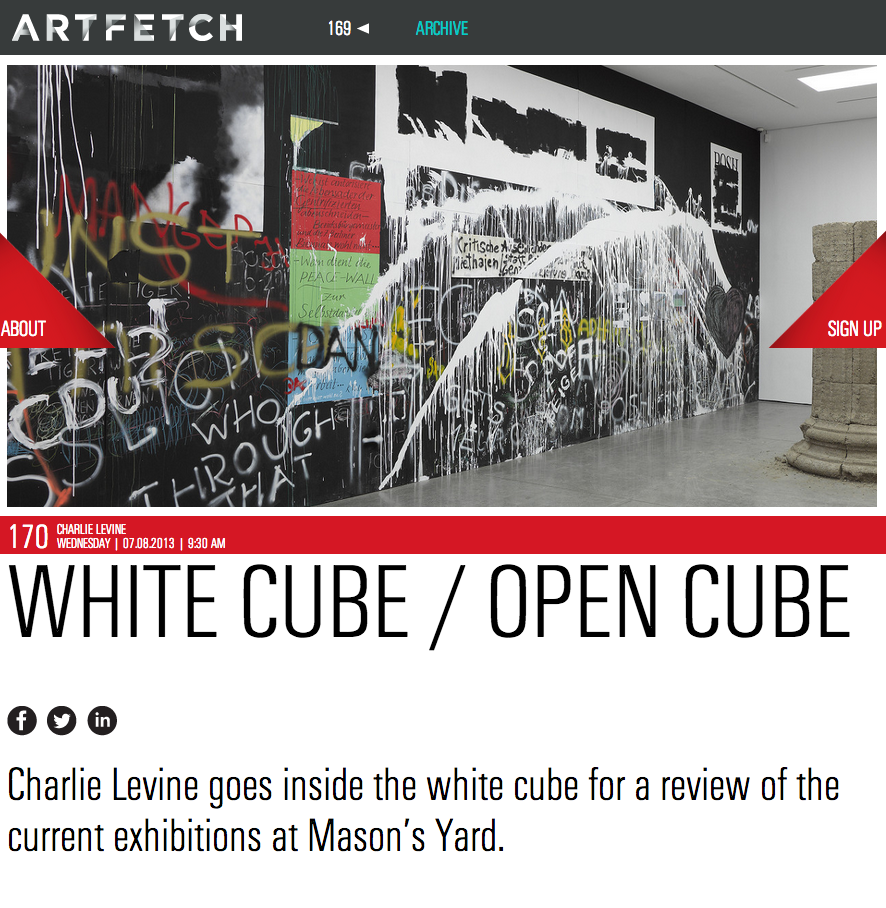 For Art Fetch, Charlie Levine goes inside the White Cube for a review of the current exhibition at Masonâ€™s Yard.

Like many curators, I have been hugely influenced by Brian Oâ€™Dohertyâ€™s wonderful and seminal book,Â Inside the White Cube, the Ideology of the gallery SpaceÂ (1976). Â The book, which began life as a series of Artforum essays, defined new ways of thinking about exhibitions and the contemporary white walled art gallery. So, when I heard that the latest Masonâ€™s Yard White Cube gallery exhibition, Open Cube, guest curated by Adriano Pedrosa, was inspired directly by Oâ€™Dohertyâ€™s book, I had to go and see it.

I wasnâ€™t disappointed. Not only is it a fascinating exhibition, but also reflects a great deal of what Artfetch believes in, and is working to achieve. The 17 artists in the exhibition were selected from an open call out for proposals â€“ a brave thing for a gallery with the branded reputation of White Cube â€“ as an open call invites a deluge. The gallery received over 2,900 applications, from which the curator interviewed 38 to select the final group.

This process of deliberately working with artists new to the curator breaks down the idea of curator/artists networks, drawing its concepts from Oâ€™Dohertyâ€™s ideas about the â€˜insideâ€™ and â€˜outsideâ€™ relationships of a gallery. The idea of opening up the application process and allowing audiences, the gallery and the curator to push themselves in terms of looking for, working with and presenting a new stock of artists is incredible, though only in terms of how top level galleries usually work. By this I mean, it shouldnâ€™t be so unusual, and as I considered this, I began to wonder at how difficult it is for new artists to break into these â€˜insideâ€™ relationships.

This relates directly to what we are doing at Artfetch, as we believe it is vital to open the processes of becoming an art world insider, so that talented artists can come to the publics who would otherwise not have a chance to see their work. And although internetâ€“based, face to face meetings are a vital part of our commissioning process. If the relationship and quality of work is there, we invite the artist to work with us.

Open CubeÂ itself is broken down into two parts: on the ground floor the exhibition concerns itself with commerce, value and currency; meanwhile, the lower floor of the Masonâ€™s Yard building looks at different forms of abstraction: including constructivist and geometric, as well as organic, amorphous, and fluid types.

Particular stand out works were byÂ Fay Nicholsonâ€™sÂ A is for Albers, a small stack of photocopied postcards, sliced in two by a sheet of Perspex; a series of large photographs of foreign coins byÂ Martin John Callanan; and Jacopo Trabonaâ€™s Untitled, which was a simple few cuts on a sheet of paper made by slicing a diamond across it. But my particular favourite wasÂ Nicky Teeganâ€™sÂ VoidÂ a flat circle of woven VHS tape over a bent steel ring.Â  It summed up the show for me: defunct material (the VHS tape) reâ€“used to create a typical fine art image â€“ the circle.Â  It was creating something new and conceptual from the old and familiar.

This exhibition is excellent, from its concept to realisation.Â  It is a must see show that I hope is the start of a new way of thinking about artist/gallery networks, and about how we produce exhibitions and create new associations. The process itself also questions the role of the physical gallery space, as the open method of calling for, and selecting works, echoes the opportunities offered by the internet â€“ something Pedrosa realises, as he notes his ambition for the show: to break down the â€œseemingly closed systems that exist in the criteria for staging exhibitionsâ€. About time too.

Art 211 provides art students with an introduction to the critical study of new media and digital art works and to the cultural and social issues that influence how audiences perceive, interact with, and are influenced by them. The development of students’ critical thinking through class, activities, discussions, and course projects is given particular emphasis.

The content of Art 211 focuses primarily on the conventions, language, aesthetics, and history employed by artists in the creation of new media/digital art. The course also considers the cultural implications that new media/digital art works and practices have for contemporary society and the culture of the United States.