Last week, I attended an environmental science conference with an evening reception that featured a short talk on art/science collaborations in the context of environmental science. The talk was followed by a musical performance â€“ inspired by the fragility of peatbog environments â€“ after which I overheard a scientist mutter â€œWhat was that? That better not have had research council funding.â€ He was not the only one; I heard similar sentiments expressed by several others as I walked to dinner.

On some level, I was disappointed by this response, but I wasnâ€™t really surprised. Despite great progress amongst those who are ensconced in the world of science communication to the idea of collaborations between scientists and artists, this is something that many scientists still donâ€™t â€œgetâ€. Other researchers are openly hostile, and certainly think that scientific research organisations have no business funding this type of work.

To be fair, these are not necessarily the attitudes of people who are disinterested in art â€” Iâ€™d be willing to bet that a fair few of those who walked away from the performance muttering about scientific research council funding being wasted on the arts also have memberships at cultural institutions. That said, whilst being consumers of culture, few scientists really see themselves as having much of a role in its creation. In an increasingly competitive funding landscape, does it really make sense to spend research money on an art project? Does engaging with the arts mean that they are less serious as scientists?

Here, Iâ€™d like to make an argument that art is good for scientists, and that there are many reasons they shouldnâ€™t be quite so afraid of letting artists loose in their laboratories.

Data monologue or dialogue? Data Soliloquies is an interesting book, produced by a former artist in residence at UCL, looking at environmental data in a cultural context.
Understanding the Cultural Context of your Research

Hot issues, such as climate change may not be subjects of contention within the scientific community, but it seems clear that the science is not being communicated in a way that has the necessary impact. Although art cannot directly communicate science or change minds, it can create a space for dialogue around difficult issues. Few scientists are likely to deeply consider the role of narrative in their work or the visual impact of their images, but for reaching society as a whole these are vitally important.

Artists are also likely to ask questions that scientists might never think to ask (because they are, well, thinking like scientists). A recent AHRC funding call (see, scientists there is some money in this!) posits that a sophisticated understanding of cultural values, rights, religions, and systems of belief is essential for understanding some of the complex legal, ethical and regulatory policy issues raised in several emerging areas of science and technology. Scientists arenâ€™t trained in this (and thatâ€™s ok) â€” but it is important to engage with people who think about these issues in a different way.

In my view, art inspired by science isnâ€™t necessarily about the communication of scienceâ€”it is a response to science. In leaving the scientific arena where it is all to easy to use technical jargon, working with artists can make you rethink the way that you communicate your research. How can you convey the complexity of the problem, while also making it accessible?

A scientist who participated in the Wellcome Trustâ€™s Sciart programme, was reflected on their experience in the report on that programme, saying â€œThrough my PhD I learned to talk in a particular way, write in a particular way. Because of that I lost a piece of myself. Through working with [X] I found the way to become the real me, rather than this slightly objective scientist that I had become. I found my voice, which I had lost because of the scientific process.â€

Artists examine problems from different angles and engage with information in a different way from scientists. Some might see this as a deficiency, and to be fair, you wouldnâ€™t want to conduct science in an un-scientific way. However, I would argue that particularly in the area of scientific visualisation, there is a great deal to be gained for scientists who engage with artists.

Chiara Ambrosio, Lecturer in the History of Science at UCL, argues that art offers an opportunity for dialogue and a critique of science. When scientific data sometimes seems like a monologue, art can produce a dialogue. Artists may not â€“ indeed, probably should not â€“ directly challenge the way that science happens or is conducted, but they can raise questions about the purpose of the science and present different ways of looking at research outcomes.

Clearly, engaging with artists is not something to be done if you donâ€™t also think that it would be fun. Artists arenâ€™t particularly interested being a part of a scientistâ€™s â€˜outreachâ€™ box-ticking exercise, or in being relegated to a dusty corner of the lab from which to quietly observe the scientists going about their business.

I am not so naÃ¯ve that I believe that having an artist in the lab is something that all scientists should do, or even most. But I do think that more scientists should have an open mind to this approach, and be encouraged to engage with them in the right context. Far from being an impediment to scientific progress, it can be a way of making your science more relevant, more impactful, and hopefully a bit more fun. In my next post, I hope to highlight a few examples of how it happens in practice when artists actively work in labs alongside scientists. 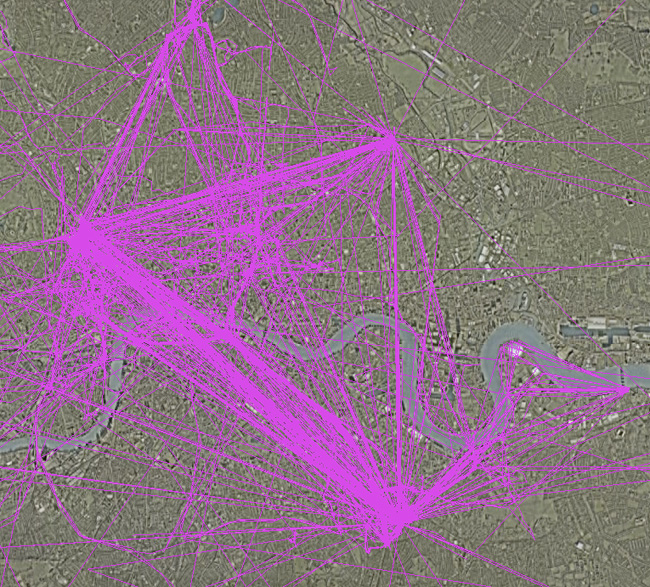 Fabian Neuhaus at UCL CASA plotted the first year’s worth of Location of I data into Google Earth, view online here